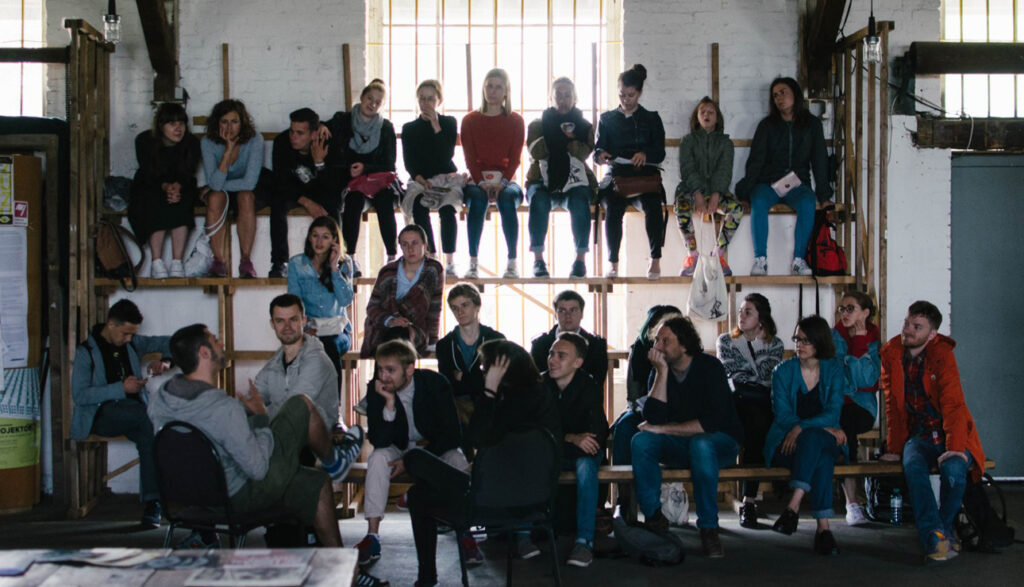 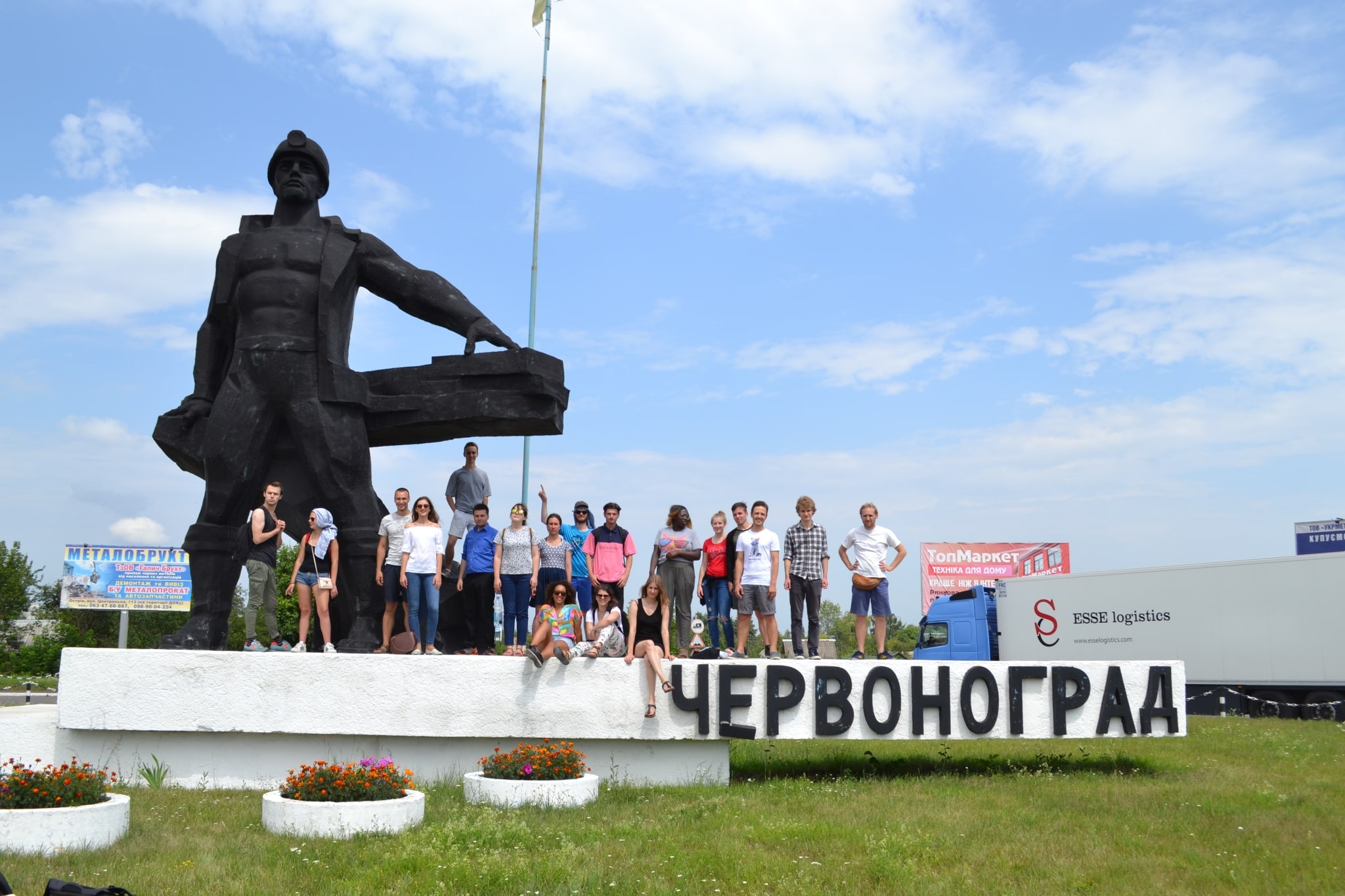 “Take Part / Bring Change” is a youth exchange program that explores modern ways of civic engagement in European cities with a particular focus on tools of community action.

The program focuses on the grassroots activism in the urban context that responds to the global political challenges as well as to the local practical concerns. The grassroots under scrutiny employ various methods to participate in the decision-making processes in the cities such as art, education, inclusive planning and placemaking but all of them are united by one common idea of the possibility to change the environment by small-scale efforts.

The program included the study visits in Berlin, Frankfurt (Oder), Kyiv, and Chervonograd where participants had a chance to look at the successful cases of bottom-up urban initiatives.

The program took place in June–July 2017.

The project is realized by Cultural Geographies NGO (Kyiv, Ukraine) and Citizens of Europe e.V. (Berlin, Germany). The project is implemented within “MEET UP! German-Ukrainian Youth Encounters” program with the support of the Foundation “Remembrance, Responsibility and Future” (EVZ) and Jugend für Europa – German National Agency of Erasmus+ Youth in Action. 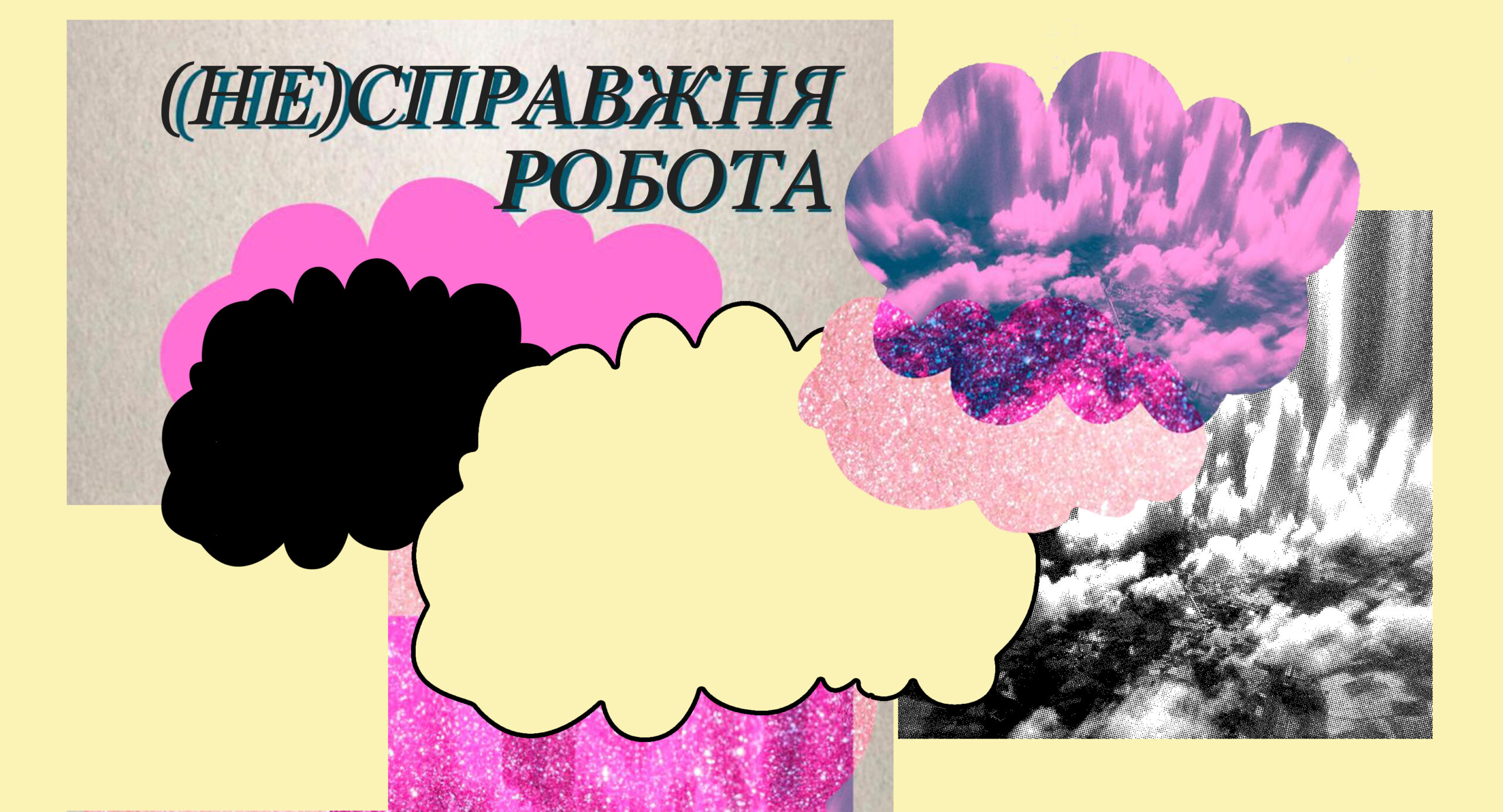 With “(un)real job” zine we aim to develop the discussion of the precarious state of cultural workers (artists, curators, researchers) in Ukraine.

We invited professionals to reflect on their experiences and share their personal stories. The zine combines formats of documentary literature and visual arts. There are also theoretical pieces on art as labor.

Open call for authors of the zine (closed)

The project is implemented by “Variable name” art-group, Cultural geographies NGO and 665Library with the financial support of the Ukrainian Cultural Foundation. 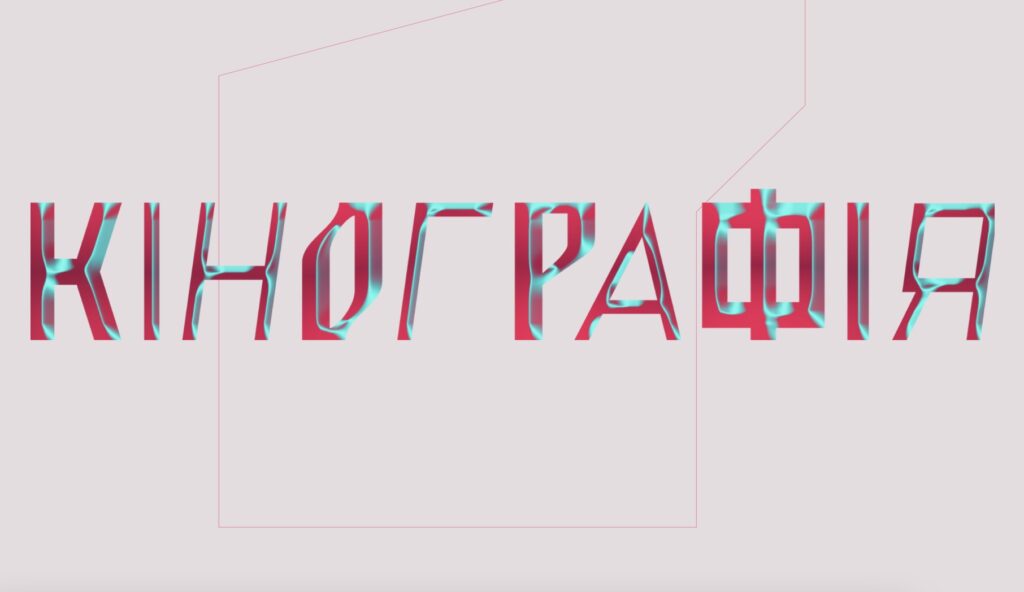 An independent initiative “Kinography. Geography of Ukrainian Cinemas of the Soviet Period” explores and maps the past and present of the Ukrainian cinema network. We focus on the process of large-scale development of cinemas in Ukraine during the 1940-80s (“cinemafication”) and modern policies of managing the cinemas inherited from this era.

Kinography’s website is an open archive and a resource for criticism and exchange of experiences. Its key components are a map of Ukrainian cinemas, as well as articles and research pieces by the project team and friendly initiatives.

With this project we seek to understand:

The project is supported by the Ukrainian Cultural Foundation.

Recordings of the events organized during the project (in Ukrainian)

Discussion about activism and archiving

Presentation of the project “Kinography. Geography of Ukrainian Cinemas of the Soviet Period” 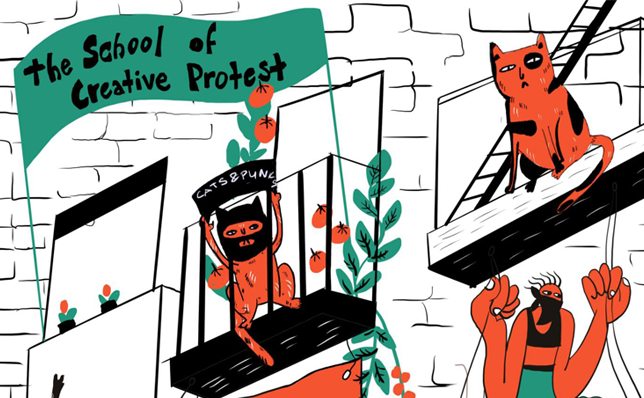 The School of Creative Protest 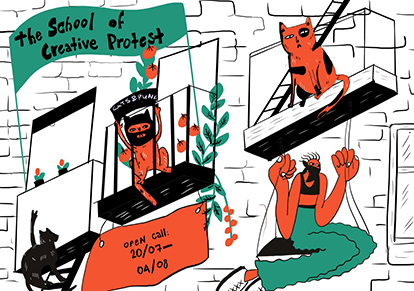 The School of Creative Protest – is an international educational program, in both online and offline formats, which focuses on art as a tool for accessing the rights, autonomy, and participation of teenagers as full-fledged citizens and decision-makers in post-socialist and post-imperial cities. The program offers a series of workshops (in both digital and physical space), during which participants will learn and practice various participatory art formats while working in international collaborative groups with participants from Ukraine, Georgia and Germany.

Each team will come up with the final product of their collaboration – cultural product in the chosen form (video, text, photo collection, map, audio recording, intervention in public space with installations, performances, exhibitions etc.) – which will be presented digitally or/and offline, depending on the quarantine regulations in each country.

The project starts on August 9 and closes on November 8. The program consists of online international meetings and workshops, and offline local collaboration. No international travel is required.

The project is implemented within “MEET UP! Youth for Partnership” program with the support of the Foundation “Remembrance, Responsibility and Future” (EVZ).

City traces is culture project which proposes the multidisciplinary program for Understanding of the Present through discovering and rethinking the Past. The project is aimed to develop potential local community, reconnect people with their surroundings, raise of local identity of the town. City traces were created in cooperation with Echo.Contact during the project #CultureForLocalDevelopment by Instytut Adama Mickiewicza and European Solidarity Centre.

Chervonohrad is a small town in Western Ukraine (Lviv region) which was known as Krystynopil. The city was found by Kraków Voivode Feliks Kazimierz Potocki in 1692. Later, at Soviet Union times, when first coal mines appeared there it was named Chervonohrad (after 1951). At 1990 Chervonohrad became the first city in the whole Soviet Union, where a monument to Communist leader Vladimir Lenin was removed.

Nowadays one of the most important landmarks of the city is Count Potocki’s palace, constructed by the order of Feliks Potocki after 1692. Today palace became a religion and historical museum (the branch of Lviv Museum of the History of Religion). Palace is gradually being destroyed, by analogy to the buildings which were built after 1951 and exemplify the architecture of Soviet modernism.

Citizens of Chervonograd are alienated from their surroundings. This city which was adapted for coal mines workers at Soviet Union times is unattractive for tourists, the state is not interested in its development.

The project includes two stages and will last for 6-8 months in 2017:

1) Analysis and archive. Within the project “City traces” we will work with the museum’s archives, exposure, and to collect data by means of local historians and residents. 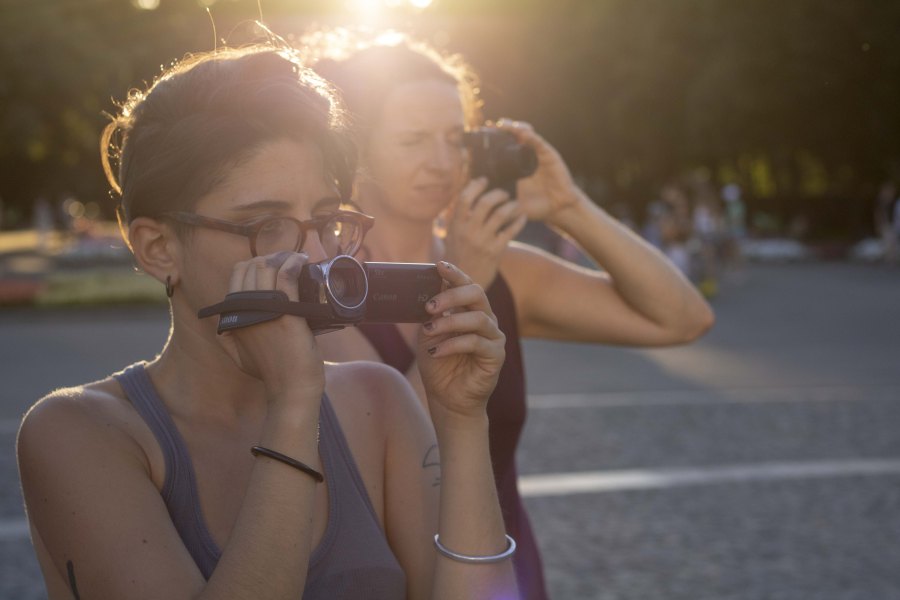 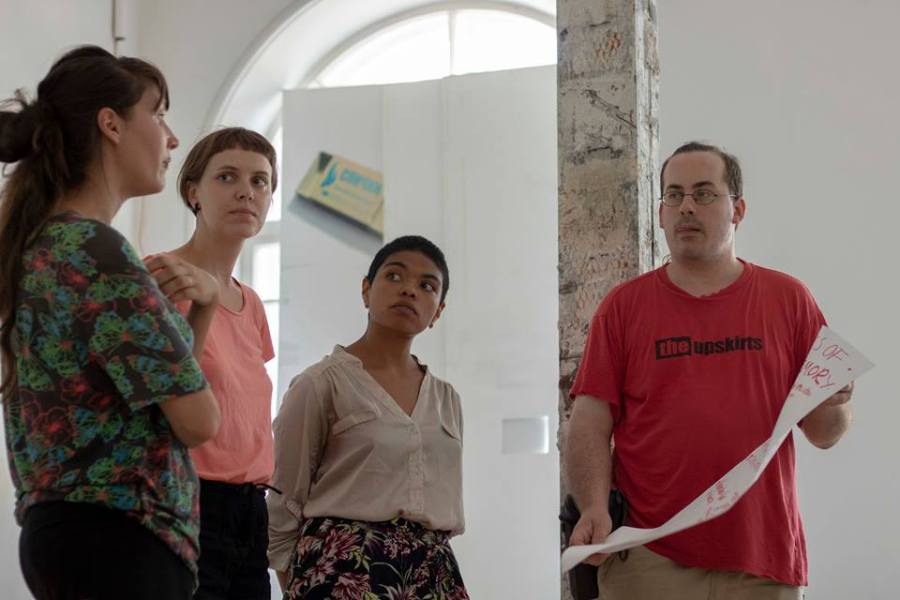 This an educational program that through artistic interaction with memorial landscapes of Germany and Ukraine seeks to enhance understanding of the politics of remembrances and promote active stance in the composition of public space and creation of more inclusive cities.

Particularly, the program focused on the phenomenon of monument that attracts the public attention in recent years worldwide and propose to examine it as a responsive to the environments, shifting under ideological pressures, and inviting to the participatory revision. It urged the participants to deconstruct memory spaces of German and Ukrainian cities through different lenses and historical narratives and interact with them in order to experience monuments as living and open to discussion and influence in democratic societies.

With the help of texts, discussions, meetings with experts, and artistic involvement, we invited participants to take advantage of current research on post-colonial city planning, gender theory, discrimination studies and enhance their interdisciplinary competencies and re-approach the planning of commemorative spaces. The results were presented during our official participation in the der “Tag des offenen Denkmals 2018” in the spaces of neurotitan /Haus Schwarzenberg, which is a monument itself. The project is implemented within “MEET UP! German-Ukrainian Youth Encounters” program with the support of the Foundation “Remembrance, Responsibility and Future” (EVZ).